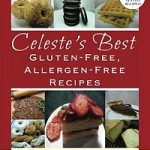 from an Italian family who always loved cooking and eating, wrote this cookbook in an easy to follow format so that people with known food allergens can enjoy the foods they love. Celeste has a Master’s Degree in Education and taught preschool and elementary school for several years.

Her advice to those diagnosed with Celiac disease or other food allergies: “Instead of focusing on the few foods you can’t eat, change your focus to all the foods you can eat and live a happy and healthy gluten-free, allergen-free life!”

Celeste was kind enough to share the reasons that she wrote this book, her experiences with Celiac disease, other food allergies and sensitivities as well as her recipe for Breadsticks.

I had developed a gluten-free flour mix and people were often asking for my recipes. My sister actually encouraged me to write Celeste’s Best Gluten-Free, Allergen Free Recipes.

In the beginning, I thought that sounded like an easy thing to do, but it actually took me nearly four years to complete the cookbook. I tested and retested each recipe until it became “cookbook worthy”, as we called it. And interestingly enough, by the time the cookbook was published, my sister had discovered that her children had celiac as well, so she now uses the book, too.

Tell me about your experiences with Celiac Disease

My nephew was the first in our family to be diagnosed with celiac disease. Up until then, I had never heard of the disease. Then my daughter Kelly was having some digestive issues. We understood the genetics of celiac (second degree relatives, such as aunt, uncle, cousin, grandparent increases the risk  to 1 in 39). We had our daughter tested and she also had celiac. The whole family removed gluten from our diets and my husband and I realized any time after that, if we ate gluten we would feel sick. I think we were so used to feeling sick all the time that before eliminating gluten from our diets we had accepted that as our norm.

Over the last few years, we also found we were sensitive to other foods such as dairy, corn, yeast, soy and nuts. We eliminated these from our diets, and everyone’s health improved.

In your opinion, how important is it to be tested for food allergen/sensitivities and Celiac Disease?

I believe knowing what foods your body is sensitive to is vital to your health and well-being. Food can be a stressor, especially when it places rapid and unusual changes in blood-glucose, insulin, and cortisol, or immune stimulation.

That said, I have mixed feelings on celiac testing. For most celiac tests, you must be ingesting gluten in order to get a positive result for celiac. There are no screening tests for people already on a gluten free diet. So for those who have already realized on their own they have a problem with it and have eliminated it from their diet it would mean reintroducing it for the purpose of the test (they currently suggest ingesting the equivalent of at least 4 pieces of wheat based bread daily for a month before testing).

There are also so many variables in the testing that could often possibly result in false negatives. And you have to remember that celiac disease can develop at any time in life, so being tested today and not testing positive doesn’t mean four years from now you might not develop the disease. Most people don’t understand that.

In order to be labeled celiac, there must be visible damage to the villi. You have to wait until there’s damage before you’re confirmed to have celiac to be recommended to follow a gluten-free diet. That just doesn’t make sense to me.

I do agree with a rotation diet for detecting problems with gluten and other foods. Your body is amazing at telling you which foods you should and shouldn’t be eating.

I have a lot of patients with food allergies who feel deprived or limited in what they can eat. How can your book help them?

I don’t think anyone on a gluten-free diet should feel deprived in any way. You can still eat all the foods you once did. Bread, cakes, cookies, pancakes – whatever you ate before your diagnosis of celiac or food allergies you can still eat, it just has to be prepared with gluten-free or allergen-free ingredients.

My goal with my recipes was to make foods taste exactly (or yes, even better!) than they did when I used to prepare them full of gluten and dairy and other common allergens. The recipes in the cookbook are free of gluten, wheat, dairy, casein, soy, corn, nuts and yeast. We also maintain a healthy diet. The book does not contain any GMO ingredients which are just being discovered to cause further damage and health issues for those with autoimmune diseases like celiac.

Celeste’s Best Gluten-Free, Allergen Free Recipes contains over 250 easy to follow recipes for everyday cooking and baking. Many who begin a gluten-free diet may have never cooked before and I kept that in mind when I wrote the recipes. They’re even written in a very easy to follow format to ensure success with each and every recipe.

My recipes can be prepared with or without xanthan gum. Many people are beginning to develop sensitivities to gums in cooking. I no longer use any xanthan gum in my gluten-free baking and cooking.

Thank you Celeste for sharing your book and Breadstick recipe!

Learn more and get your own copy of the book at http://www.celestesbest.com/